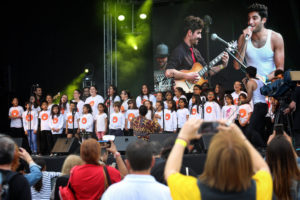 The Platform for the Language organizes a concert to promote the use of the language
DAVID COBO BARCELONA | 05/20/2018 00:00

“The music of a land tells you how it will be for people who come from outside.” This is what Iussif Alhassan, born in Ghana, who was in love with the Catalan language and who arrived in Barcelona in 2003. Speaks an impeccable Catalan and celebrates that music has been, precisely, the great protagonist of the latest initiative of the Platform for the Language: the concert Fes Mer Meridiana, held yesterday in the campaign El català, llengua comu, a minifestival of Catalan music with the intention of normalizing the use of the language in areas with little social use of Catalan, such as the case of the Barcelona district of Ciutat Meridiana.

In this neighborhood diversity is a norm. Historically, a worker, with a great deal of immigration from the State, is increasingly turning to multiculturalism. Foreigners represent 28.5% of the population, and this has meant that the “shame” of speaking in Catalan without proper training and in an unreasonable way means a great wall for the normalization of the language. Iussif recognizes him, but also his friend Sakab, and Carmen, who is born in Ecuador and has been rooted in the neighborhood for 20 years, and even Filiberto Bravo, representative of the Neighborhood Association of Meridian City. Everyone has suffered that blush when using it in day to day. That is why the task of the Platform for Language, as stressed by Eulàlia Buch, head of the social area, is to “widen the base” and “get the neighbors to speak Catalan when they walk through their streets.”

And one of the most effective ways to get people to speak Catalan when you walk is, without a doubt, organizing a concert in the middle of Ciutat Meridiana. Specifically, in the old football field, where yesterday the groups met the attention of the different audiences. The rogue, taking his parents off, took control of the esplanade at the beginning, with the presence of Ruc’n’Roll on the stage and the collaboration of Vozes, a social project that fights for integration in through music. Then, Mazoni, La Iaia, Koers, Mishima and Joan Garriga were in charge of seducing the adult audience. Also the one of the thickness of neighborhood assistants, although they acknowledged not following them long before they visited the neighborhood.

The concert was perceived as a kind of joint celebration a year after the entity for language began a plan of action in Ciutat Meridiana to promote Catalan. Since then, conversation workshops have been reactivated for adults, and language improvement meetings with the participation of the local association have been “all a success,” said Bravo. And while the Catalan verses went up at night, a group of people from other parts of the State remembered laughingly at the first expressions they learned. Everyone was miserable, but yesterday it was all worthwhile. And, thus, the district of Barcelona with less use of Catalan as the first language became an urban Canet Rock, integrating and proud of its diversity.