Since 2014, during the month of July, VOZES organises the Training orchestra International, where during the whole month, the Training VOZES’ orchestras welcome other orchestras from different European counties, both from conservatories and schools, and work in a join repertory with the aim of increasing their level and achieve the objective of performing several concerts by end of their stay, in Barcelona as well as in Switzerland, Italy, Austria… or at the country of origin of the visiting orchestra.

This year 2017, we are preparing the IV Orchestral Training VOZES. If you are interested in participating, refill the following form: https://goo.gl/yptcyJ 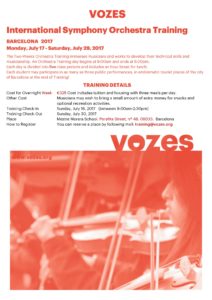 During 2106 we celebrated the III VOZES ‘ Training Orchestra International, hosting:

As the climax of the Training, the following concerts have been performed:

The training is a great opportunity for its participants, beyond the purely musical, beyond learning, exchanging and sharing other cultures and ways of relating to one another.